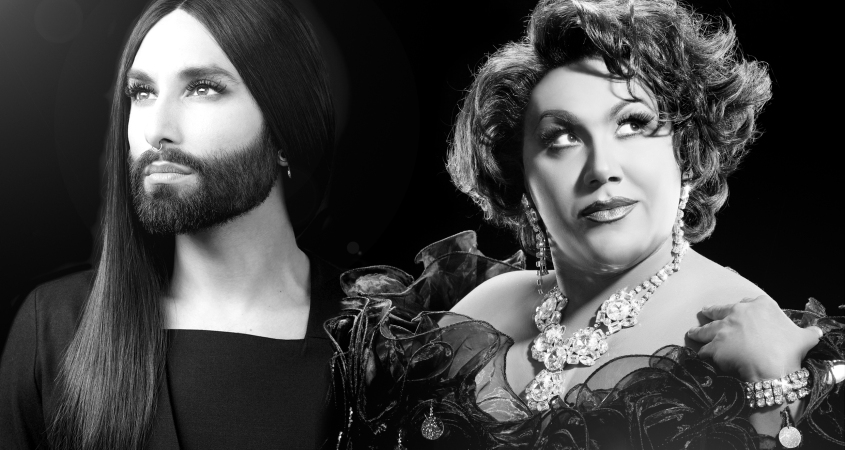 Voices of Austria and Australia combine

Musical events where two great artists unite always make for an evening of enthralling entertainment. Last night however, Melbourne was treated to three world-class artists at Hamer Hall, and over two hours and through various musical styles, we were taken to music wonderland. The six standing ovations throughout the night are a testament to the magic of these renowned vocalists.

The audacious Trevor Ashley kicked off with classic tunes and brazen cabaret-style anecdotes of bad dates gone wrong, warming the audience up for a wild night of dauntless divas. Ashley channelled the great Shirley Bassey, gave a stirring rendition of the toe-tapping Peter Allen rousing anthem ‘Quiet Please, There’s A Lady On Stage’, and dazzled us with cabaret classic ‘The Man Who Got Away’. Ashley’s vocals especially impressed with Broadway classic ‘People’ from Funny Girl, receiving a deserving rousing ovation.

Eurovision legend Conchita Wurst delivered stunning anthem after anthem with her unmatched, heavenly soprano tones. This was Wurst’s first time performing here, and her warm and gracious personality has undoubtedly enamoured her first Melbournian audience. Performing recognisable hits including ‘Out Of Body Experience’ and infamous winning Eurovision ballad ‘Rise Like A Phoenix’, Wurst also wowed with lesser-known tracks peppered throughout the evening. Ashley and Wurst also dedicated a substantial portion of the evening to a timely tribute to the music of James Bond, including Adele epic ‘Skyfall’, and piano-bar favourite ‘Goldfinger’.

Kate Miller-Heidke’s brief two-song stint in the second act stole the show for me. Miller-Heidke’s seamless blend of classical and contemporary vocal styles is mesmerising, showcased in both the finale from her 2016 Opera ‘The Rabbits’ and Eurovision ballad ‘Zero Gravity’ from 2019. She joined Ashley and Wurst for a gentle delivery of ‘Somewhere Over The Rainbow’ that made the perfect conclusion for the night.

Conductor Michael Tyack lead the magnificent 40-piece symphony orchestra who backed every piece with delicate nuance and soaring, rich explosions and crescendos. There’s no recorded alternative that that can match a stage full of live professional musicians in perfect synchronisation, and through every alternating musical style this set list demanded, this heavenly group were precise and moving.

Keep an eye out for the next live performance of any of these heart-warming artists.

Black comedy classic into a fantastically biting and bitchy musical

Before I went to see Heathers: The Musical I had vowed to myself that I would watch the cult movie so I was prepared, but I ultimately didn’t, and more’s the better, as I feel it would have utterly ruined the fresh first-time delight if I had. That said, there is still plenty for fans of the film to love – those classic lines (that even I knew) delivered with just enough homage to avoid pastiche. Heathers is a twisted classic story of high school popularity, love, sex. And murder. Written for the stage by Kevin Murphy and Laurence O’Keefe, the show delivers acerbic wit and darkly poignant comedy in spades. 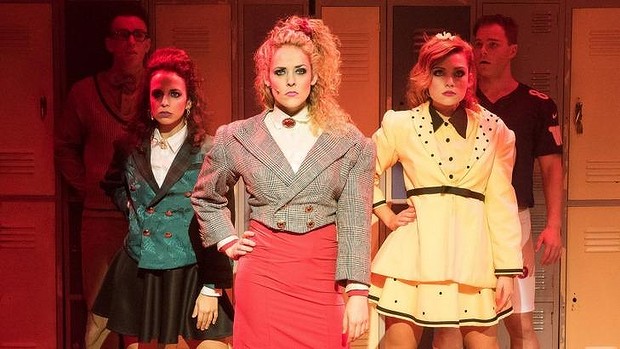 Veronica Sawyer (Hilary Cole) is a Senior at Westerberg High School in Ohio; in desperation to make her final year more bearable, Veronica asks the eponymous popular girl gang, the Heathers, if they can help her by just letting her associate with them. Veronica falls in line with the Heathers, until she meets broody Baudelaire-quoting heartthrob J.D. (Stephen Madsen) whereupon things start to go slightly pear-shaped… Cole and Madsen both inhabited their roles wholly and convincingly: their chemistry positively palpable.

The Heathers comprise of ‘mythic bitch’ Heather Chandler (Lucy Maunder), neurotic bulimic Heather Duke (Hannah Fredericksen), and bland cheerleader Heather McNamara (Rebecca Hetherington). All three performers are exceptionally funny, but Fredericksen really stole the show as Heather Duke whose ascension to Queen B was hilariously unhinged. Vincent Hooper and Jakob Ambrose looked like they were having heaps of fun on stage as the lewd and cringe-inducing jocks Ram Sweeney and Kurt Kelly. Lauren McKenna positively shone as Ms Fleming, whose culturally appropriative Afro-inspired dress and hair were so bad they were genius. It would also be remiss not to mention Mitchell Hicks‘ impressive work as J.D.’s unfathomably repulsive father ‘Big Bud’; his every appearance on stage made me want to run screaming from the auditorium. The other members of the ensemble cast – Sage Douglas, Heather Manley and Stephen McDowell were all excellent, and provided the much-needed pace for many of the song-and-dance numbers.

The only area in which the production was let down was in sound design; while director Trevor Ashley and musical director Bev Kennedy did a wonderful job bringing the musical to the Arts Centre stage, on opening night the sound quality in the theatre was not successfully monitored or moderated. This meant that while the cast were performing it was virtually impossible to hear what they were sing-speaking over the noise of the band. This aside, the rest of the production coordination was outstanding.

I therefore thoroughly enjoyed what I could hear of the songs, particularly the LGBT-inspired number delivered by Ram and Kurt’s fathers. Despite being mostly unable to discern the lyrics, I still had a fantastic time; I couldn’t care less what they were singing about half the time because the performances were making me laugh, which is what I wanted. The melodies weren’t original, or even particularly catchy, but every song simultaneously captured the spirit of the 80s, as well as the neuroses of high school to which we can all relate.

Well-thought out set design (Emma Vine), lighting design (Gavan Swift) and choreography (Cameron Mitchell) were essential to support the cast while they careered about on stage. Angela White’s costumes were exceptional and instantly transported us back to 1988.

Heathers had the audience – many of whom were no doubt hard-to-please movie fans – whooping and rolling in the aisles for so much of the performance that any glitches or technical missteps went entirely unnoticed. Indeed, such was the excitement of the ladies in the row in front of me that when J.D. made a brief appearance in the audience one of them quietly screamed, ‘Ooh Julie! Look who you’ve got next to you!’ And I think that just about summed up the experience – it really did make me giddy with high school excitement, albeit with rather more murderous inclinations. I can’t recommend it highly enough.

Heathers is showing at the Arts Centre on Southbank until 22 May 2016. For tickets and more information visit: http://www.artscentremelbourne.com.au/whats-on/2016/musicals/heathers-the-musical 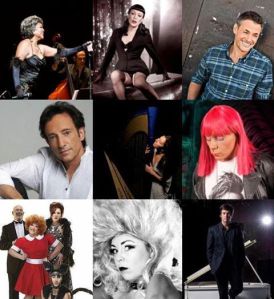 A festival first born in the garden of delights that was The Butterfly Club’s original address has blossomed out of its next gothic home in the South Melbourne Town Hall to now stretch its sequin canopy over the length and breadth of our music-loving city.

It was a fantastic and bold move by directors Neville Sice and David Read to open this year’s heavenly event at the auspicious and grand old dame of live performance art, The Palais Theatre on St Kilda’s Esplanade.   Lush red curtains and a smattering of sparkling stars pulled cabaret performers close to the practically sold-out audience for an intimate taste of this beloved art form.

Fem Belling, jazz vocalist and leading lady (performing her own show Blossom Dearie at Chapel off Chapel) hosted the Gala with all the flair, playful wit and costume changes one could hope for.  Clearly a night of stand-out acts from the festival, Trevor Ashley and Rhonda Burchmore took parody and adult-only panto to gin-soaked, pun-tastic new heights, with Burchmore proving she has still most definitely ‘got it’.

Divine Gala moments included Yana Alana’s scantily-clad excerpts from her anticipated return in Blue Show (being performed at 45 Downstairs). Gripping all with her lasso quips and razor-sharp lyrics Yana Alana brings a certain cheek to the stage others could only dream of.  New York cabaret icon Joey Arias took us from the cheeky to the sensual with his beautiful channeling of Billie Holiday. His velveteen tones should not be missed in Arias on Holiday at Chapel Off Chapel.

Absolute crowd favorite was the impeccable Mary Wilson, original chanteuse of The Supremes.  Draped in a red gown, diamonds and white mink stole, Ms Wilson was every bit the dream diva.  Performing excerpts from Stormy Weather: The Lena Horne Project, she captivated the entire room with her grace and beauty.

This Gala Opening Night was the perfect initiation into the superb world of cabaret.  All the acts were tremendously chosen, with performers such as Tara Minton, David Pomeranz and Adam Guettel who tantalized all not only with their voices, but literally with the sharing of secrets from their personal lives and work practices.

It is this transformative journey from cabaret room into the mind, body and artist imagination that fuels the fire of cabaret-loving audiences.  This is an ideal time of year to make your way into an intimate performance space to have your soul sparked by some of the best in the business.

The Opening Night Gala took place on Wednesday June 26, 2013. There are over 150 performers and performances running NOW for the Melbourne Cabaret Festival 2013 until 7 July. Check www.melbournecabaret.com for full listings.