Skip to content
You don’t know this man
By Bradley Storer
New Melbourne company The Collective make their theatrical debut with the first professional production in Australia of Jason Robert Brown’s modern classic Parade, a tale of injustice, prejudice and murder in early 20th-century Atlanta. 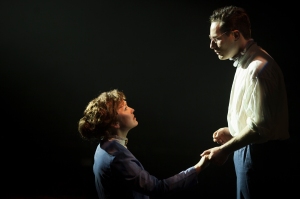 Luigi Lucente as Leo Frank, the Jewish factory superintendent who is accused of murdering young Mary Phagan (Jemma Plunkett), turns in a performance perfect from head to toe. Lucente portrays Frank as a man whose alienation from the community has left him a lonely sensitive soul with a icy, defensive exterior – not shying away from the more strident aspects of Frank’s personality, Lucente intertwines them in such a way that they strike a delicious note of ambiguity over whether Frank is capable of committing murder. His plain-spoken appeal to the jury, ‘It’s Hard to Speak My Heart’, is heartrendingly beautiful.
Laura Fitzpatrick brings a subdued gentle air and a sweet, touching voice to Frank’s wife, Lucille. She takes a quieter, less belty approach to Lucille’s big numbers ‘You Don’t Know This Man’ and ‘Do it Alone’ than some interpreters, but this means we never lose sight of Lucille as an ordinary woman driven by an immense inner strength which blossoms over the course of the story. The delicacy and chemistry which she and Lucente bring to the couple’s penultimate love duet ‘All the Wasted Time’ is electrifying, sending shivers up the spine.
The supporting roles are filled out admirably – Cameron MacDonald has charisma to burn as reporter Britt Craig. who whips the South into a media frenzy over the controversial trial, and turns in solid work as Governor Jack Slaton. Tod Strike is a commanding presence as amoral prosecutor Hugh Dorsey, and Andrew Doyle brings an impish charm to Frankie Epps, the teenager who spearheads the mob violence which leads to the musical’s tragic conclusion. The ensemble overall are top quality, bringing fierce commitment to a variety of roles and levels of moral ambiguity.
The performance space, which has the audience split in two on either side with action playing out in the middle, is used to thrilling effect in the first act. The isolation of husband from wife in ‘Leo at Work/What Am I Waiting For’ is illustrated perfectly as they stand at the separate ends of the stage echoed later by the chillingly emotional image which closes Act One. The cleverly staged trial sequence symbolically and physically makes the audience implicit in the condemnation of Leo, as well tapping into the inherently theatrical nature of a trial itself. However, this fades in Act Two where the staging is used less imaginatively and begins to impede the effectiveness of the show instead. The split staging and somewhat confusing direction of the last scene dilutes the impact of its final revelation, reducing the poignancy of what should be the emotional sucker-punch of the musical.

These small issues aside, this is a strong debut from the emerging company with a challenging and immensely satisfying piece that should be a ‘must see’ for all Melbourne music theatre enthusiasts!