Behind closed doors is where camp comedy begins

I was not sure what to expect from the world premier season of Mademoiselle, advertised as “a gothic camp music theatre revue” with two satirical manservants singing tunes about what could have been, but I knew I would be in for a treat. 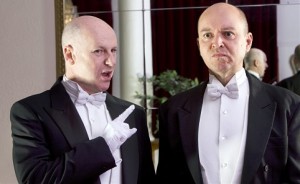 Our two manservants, played by creators Michael Dalley and Paul McCarthy, sneak into their employer’s boudoir and let loose some glitzy musical numbers revolving around fantasy, regret, power and servitude.  The very opening song relaxed the audience and assured us that we were in for a night of cheeky laughs.

Mademoiselle is a very wordy and witty revue with just a few jokes falling flat. However, the characters had such an air of assumed superiority that you had to second-guess yourself when you didn’t laugh – was it because the joke wasn’t that funny or because you were just too lower class to get it?!

The banter and bitchy retorts between the two servants as they try to gain one up on each other was a joy to watch and Dalley and McCarthy have a great rapport together. You can clearly see they are having a ball with this. However, I would have liked to see the pair push themselves more with volume and vocal projection – at times, their speaking voices were louder than their singing ones, as if they were holding back during the songs. Also, there were moments during the duets when the performers were not in time with each other, but they were far and few between.

Composer John Thorn on piano was delightful to hear and played with great precision. Favourite numbers of the night were “The Passive Aggressive Filipino Amway Lady” which had me in stitches when the title character met the articulate call centre operator from Dubai, and “The Nasty Queen From Menswear” made delightfully scarier by the fact that I too was once a victim of such a person in previous employment.

The sets and costume, while minimal, added so much to this revue. The constant presence of the toilet was a constant reminder that despite their airs, these two manservants were just that and nothing more. The single props for their impersonations were well-chosen and clearly distinguished their changing characters: from Indian call-centre workers and Filipino Amway ladies to bitchy sales assistants, they were spot on, which is no surprise given Dalley and McCarthy’s established performance backgrounds in comedy and theatre.

Mademoiselle is certainly cheeky good old-fashioned camp fun that will see you leaving the theatre with many belly laughs having been had.