Delivering yet another flamboyant jewel to the Shakespearean scene this summer, Melbourne Shakespeare Company (MSC) returns with Much Ado About Nothing. 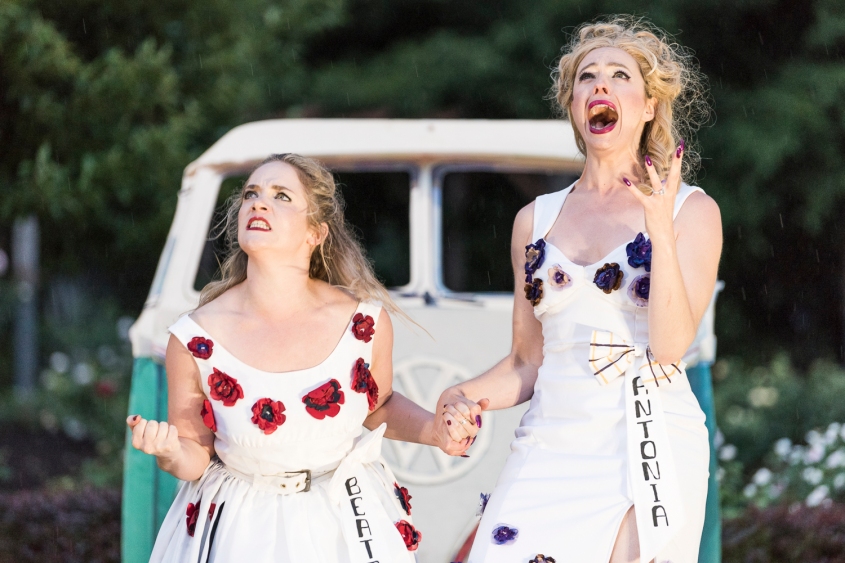 MSC manages to hook its audiences with its flair for performing some of the great comedies of Bill Shakespeare in a way that is totally enjoyable and easily accessible by audiences of today. So much of the work comes together due to its excellent direction from Jennifer Sarah Dean and her talented crew and ensemble cast.

The start of summer in Melbourne delivered some intense rainfall, and set in the beautiful rose garden of the St Kilda Botanic Gardens, the cast of Much Ado played on. We were thankfully housed under a marquee, but the cast’s professionalism through the occasional lashings of rain was commendable. With white frocks and florals a-plenty, the production was clearly set for warm days and balmy evenings. The use of the rose garden was artful for this production, and the creative use of space in the usual MSC style, was exceptional.

Much Ado is one of the more popular Shakespearean comedies, where the arrows and slings between leads Beatrice and Benedick, make for some enjoyable viewing. If you can get past the cruelty of Claudio’s treatment of Hero, it makes for a charmingly feather-light play.

Leading as Beatrice, Annabelle Tudor embodied the character’s classic snarky attitude and emotional range with humorous flair and passion. Tudor makes an excellent Beatrice, and her understanding of physical comedy (like much of the cast) is quality. As Beatrice’s counterpart Benedick, Fabio Motta gives a charming and delightfully warm performance, which is unusual for the Benedicks of productions past who often resort to snideness and arrogance to portray the character. The pair are supported by a fantastic cast, who perform in lively synchronicity with one another. Madeleine Mason made for a sweet Hero, the cool hippy vibe of the Friar played by Hunter Perske added another dimension to this enjoyable production, and everyone equally jumped in for solid performances and fun. May Jasper and Jonathan Peck were a satisfyingly slapstick pair as Dogberry and Verges, and Khisraw Jones-Shukoor was the definition of disco-sleaze as Don Pedro.

The musical element of this MSC performance was not the strongest, even where it definitely added to the comedy. Musical director Ben Adams, who directed an astonishingly fun and talented a cappella group in The Comedy of Errors in March this year, couldn’t quite get the performers to hit that mark this time with the evident exceptions of the delightful Nicola Bowman (Margaret) and Motta. The enthusiasm was there, but the quality of the musical talent did not match the excellent quality of the acting on this occasion.

A real highlight is Rhiannon Irving’s imaginative costume design, which once again adds a great deal to the delight of the performance. The choice of elegant white was utterly appropriate for the outdoor setting in summer, special mention must be made of the fascinating fascinators fashioned from CD’s, cassette tapes, and heat-affected records, and the consideration that went into Don Pedro’s flashing headgear was noted and greatly appreciated.

Despite the rain I really enjoyed myself, and have no doubt MSC’s future productions will continue to deliver.

You can catch MSC’s Much Ado About Nothing in the beautiful rose garden every weekend of December leading up to Christmas, 2pm and 7pm. For tickets visit: https://www.eventbrite.com.au/e/much-ado-about-nothing-by-melbourne-shakespeare-company-tickets-39610284427

Shakespeare is reimagined in this marvellously funny production of the Melbourne Shakespeare Company. No one left Brunswick’s Siteworks where the production was held without having cackled with joy.

Shakespeare’s comedies are at times something to be endured with gritted smiles at out-dated jokes that haven’t been reined in for their times, but director Jennifer Sarah Dean and assistant director Paul Robertson have masterfully done justice to the work.

The production follows the usual case of mistaken identity of two long-lost twin brothers (Nathaniel Schneider and Jonathan Peck) and their forlorn father (Hunter Perske). Throw in two tumbling manservants (Nicola Bowman and Madeleine Stewart), sisters of differing temperament (Jaqueline Whiting and Lelda Kapsis), a courtesan (Annabelle Tudor), and a magician-esque doctor (Bridget Sweeney), and you have a comedy of seismic proportions.

I rarely get the chance to commend a production for all its elements, but The Comedy of Errors is perfection. The cast delivered with humour and panache in such synchronicity that their talent coupled with the direction of the performance provided an unprecedented professionalism (other companies should take note). Costuming by Rhiannon Irving was unique, colourful and striking. Each cast member donned a wig, which appeared to be put together by some seriously talented arts-and-craft person. A special mention must be made to the costuming of the a capella group (Andrew Isles, Ryan Smedley, Mitch Ralston and Patrick Hill), who sported brightly-coloured stripes and matching beards and lipstick. Irving’s creation was so imaginative and charming, the entrance of each character brought more marvels to admire.

Musical director Ben Adams concocted a mix of delightful old and new-school tunes for the a capella group to perform at opportune moments of the show. At times our quartet would enter from an unsuspecting part of the outdoor setting with a flourish and in unison, that would send the audience into fits of laughter. It was a modern touch that provided plenty of entertainment throughout the show. Further, the choice and use of Siteworks’ outdoor space from varying entrances, exits and positions made for an excellent and surprising use of space. The cast of characters had full use of the performance arena, and as an audience, we would shift our heads in wonder at all the happenings around us.

Overall, I am absolutely thrilled with the choices made in this production at every level. I would happily sit through the performance again and cart out every person I know in what would surely be a lively and enjoyable night.

The Comedy of Errors was performed March 25 – April 2, 2017. For upcoming productions, visit https://www.melbourneshakespeare.com/