The Sydney Theatre Company/Malthouse collaboration of Michael Gow’s modern classic Away opens with Mendelssohn’s A Midsummer Night’s Dream to stir the summer heat from the stage to warm this Melbourne audience in winter. 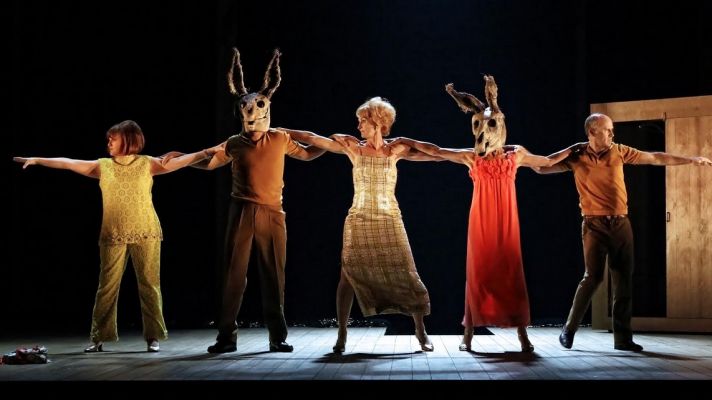 Matthew Lutton’s blaze through the Malthouse Theatre (and now as Artistic Director) has brought Melbourne audiences some extraordinary and outlandish theatre to feast upon in recent seasons. The announcement that Away would be on the banquet table for procuring no doubt left many theatregoers with a morbid curiosity. The matrimony between the rugged Australian summer depicted in Gow’s writing and director Lutton’s horror dream of dancing animal skulls somehow takes this classic to new contemporary heights. Yes, Dale Ferguson’s costume design keeps us well within the bounds of the 60s, but his set complies with the post-modern theatrics we’ve come to expect from the Malthouse under the gaze of Lutton. Lutton injects into Gow’s world a kind of dystopian synchronicity that plays out as the actors dance in formations together like glamourous zombies trying to forget their realities to Stephanie Lake’s choreography.

What we have depicted in Away is an Australia of then which is not that much different from the Australia of today. Everyone has high hopes for the Aussie dream, but even in the most comfortable homes the world outside will always rudely awaken us. What unites the families of Tom (Liam Nunan) and Meg (Naomi Rukavina), our high school would-be, could-be, not-be lovers, is the quiet sadness and acceptance of a life that was hard-won. The fear that something could steal the dream away lurks beneath the happy exteriors of (most) of Gow’s characters, and becomes a focal point of the play. That dream is already stolen from Roy (Glenn Hazeldine) and Coral (Natasha Herbert) through the loss of their son in the Vietnam War. Herbert’s Kim-Novak look-alike Coral continuously treads the line between reality and the past, slipping further and further away from the desperate grasp of her husband. Coral is not mad because Roy cannot control her; she is in such a deep state of grieving that the Aussie dream is well and truly lost for her. Herbert gives Coral a fluid naivety damaged by tragedy; her performance is one of the heart-breaking standout’s alongside Liam Nunan’s Tom.

Amongst the great pretenders are Vic (Julia Davis) and Harry (Wadih Dona) who manage to live in the moment as they watch their son Tom slip away from them due to his illness. We know the inevitability of grief will befall them, and they too may just stop smiling through their sadness and join Coral on her faraway shore.

In contrast we have the couple whose great tragedy is staying together, existing in a chronic state of unhappiness in which no holiday can salvage. Heather Mitchell’s Gwen is marvellously funny and annoying as her shrill voice drains her family of any moments of joy; a complacent husband Jim (Marco Chiappi) continues to accept his lot with a resigned shruggery. Their family is one blessed with health, but they are not untouched by the life of having lived as battlers-come-good. Gwen’s chronic state of stress is indicative of another kind of grief, one where a lifelong sacrifice for a future yet lived leaves traces of bitterness.

This is still a sensitive and poignant production by Lutton amidst the jarring devices of non-naturalism that threatens to break down the walls of their world. Audiences will be surprised from the outset of this play; if they are expecting a classic re-telling of Away they will be in for an awakening – but it really is a very good one.

Away will grace Melbourne audiences at the Malthouse Theatre until May 28th. Collect your tickets here: http://malthousetheatre.com.au/whats-on/away?gclid=Cj0KEQjwoqvIBRD6ls6og8qB77YBEiQAcqqHe6-xVP730ooUfRIBdx6VZ67CrJxYFl3Ytuu3-bHvzQcaAulB8P8HAQ

Satirising the current state of Australian politics with the heady and destructive tendencies of the Prince of Denmark lends for a wild, funny, and at times utterly confusing production. Just as I’ve grasped one metaphor and issue, Mark Wilson’s Anti-Hamlet shifts us onto the next, expecting its audience to intelligently manoeuvre themselves through the multi-layered political arc Wilson has created.

This is the third of Wilson’s Shakespearean adaptations after Unsex Me and Richard II. Wilson comments that these productions “inherit from Shakespeare”, and fill the gaps. On this occasion, Wilson engages with the Australian inability to confront its history. History is the underlying theme of Anti-Hamlet, but I am deeply sceptical as to how tenuously Hamlet itself connects to a country’s collective blindness.  I will say in Wilson’s defence, his ability to bring Shakespeare’s Hamlet into contemporary ‘realness’ and embellish its themes with references to the Australian political climate is impressive. That is no easy feat. Despite this tenuous connection, the key issues rage on. A young man, both sexually and politically impotent – afraid and trying to find meaning at a time when ‘democracy’ feels more like forcing kool-aid down your throat.

Wilson is wildly funny and painfully irritating as Hamlet. Wilson is accompanied by some theatre-heavyweights in Marco Chiappi’s Claudius, Natasha Herbert’s Gertrude, and Brian Lipson’s marvellous contribution as Sigmund Freud. These actors brilliantly dive into Wilson’s writing and bring to life the characters in an exciting and relevant way. Herbert’s Gertrude is an indulgent, lazy queen whose concern is with turning her gaze towards her possessions rather than noticing that her power is waning. Chiappi’s Claudius is the fabulous politician in the blue tie (a wink to our political leaders), desperate to become President of Australia’s new Republic. A new addition is the role of Freud, and it’s so apt that Freud should show up as the family psychiatrist to stir Hamlet et al. Freud, like Hamlet in this production, is a self-aware character that almost recognises that he is party to a play and merely a plot device. It works very well, and adds yet another intricate layer to this complex work.

Anti-Hamlet unpacks two issues astonishingly well. Firstly, there’s the spin-doctoring behind politics, which takes on a seductive and serpentine fervour in Charles Purcell’s energetic American marketer, Edward Bernays. Secondly, there is the idealism of those politically-minded young Australians who succumb to the political machine in a feeble attempt to create change in the world. Ophelia (Natascha Flowers) is the modern woman; she’s no limp-limbed belle of Shakespeare’s imaginings. A Rhodes Scholar and Oxford graduate, Ophelia comes brimming with ambition for a better nation, but is the futile pawn to a more experienced and cynical power under Claudius and his newly-minted henchman, Bernays. Wilson’s Hamlet serves as the alternative to Ophelia – a politically awakened youth with nothing but privilege and a blossoming conscience who thinks taking back ‘blackface’ to undermine racism is an acceptable and intelligent statement. Hamlet is politically impotent, and this funnels through into his sexuality, which he attempts to mask. This is a striking point of discussion for this production, because it single-handedly takes on issues that are utterly relevant in Australian politics today, but does so in a manner that humours and pinches those politically aware within its audience.

Anti-Hamlet is self-indulgent and utterly self-aware. If you’re a Shakespeare puritan, perhaps step away. However, if you’re interested in a play that engages with the politics of today in an original way, you may be convinced to come down to Theatre Works and indulge yourself… and Wilson.

For all the chaos of Christopher Marlowe’s brief life, I’m sure he would have sat in the Merlyn Theatre last night with a wicked smile on his face to see the tender chaos Matthew Lutton and his team resurrected. 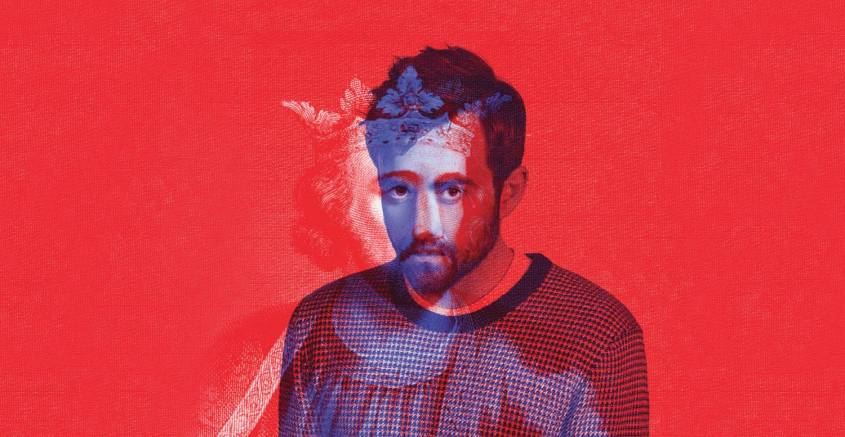 But let’s be honest, with Anthony Weigh’s writing and Marg Horwell’s impressive set design, this work is a beast of its own glory.

The play is broken into the fragments of the artefacts the boy prince (Julian Mineo/Nicholas Ross) inspects from his father’s reign. The noble handle of a sword and handkerchief descends to a bag of faeces left at the palace gates. The frames of the scenes marked by the flint and steel of the lighter, signify the brief candle of these moments leading towards Edward II’s fall.

Edward II is a museum to the hypocrisy of the people’s love for their monarch. It’s a cold world, but despite the blood and pulp of the people within it, at the core of this rotten apple of yet another kingdom, is the most tender love story between two men I have ever witnessed on stage. Johnny Carr (Ned) and Paul Ashcroft (Piers) capture the heady, shaking, vulnerability of the impossible-to-bottle kind of love. Their energy was marvellous on stage.

Ned’s brutality and unpredictability at first drove this production, but even the bubbling inner-workings of an unstable prince could not quash the ambitions of the likes of Mortimer, played with mastery by Marco Chiappi. When Chiappi got going on Weigh’s words, it became Mortimer I. For all the sweat and passion of Carr and Ashcroft, Chiappi’s delivery drew the masses into the palm of his hand – audience and peasant alike. Even as Mortimer lulled a sensually delusional Ned towards death, we could not help but accept the sensibility of this decision. Because tomorrow, we will have another king.

The woman’s role in Edward II is to nurture the next king, but Sib (Belinda McClory) laments the loss of her potential in this world. Although Sib plays the role of the queen-to-be, there is ambition pulsing through her sinewy body for a surge of control. McClory’s voice is hollow and powerful as she pushes her lover aside and walks with purpose across the stage. But at the close of this play, she’s exhausted, calling out, unanswered, into the kingdom she birthed but could not rein.

The Malthouse Theatre has always been the Marlowe-esque bad boy of the Melbourne theatre world, challenging the dimensions of theatre and immersing its audiences in treacherous and thought-provoking terrain. This one such terrain was bold, decadent and ultimately heartbreaking.

Originally commissioned for French theatre company Tabula Rasa, the English-language premiere of Dreamers presented by fortyfivedownstairs could easily be a narrative born straight out of current Australian politics and newspapers. The story follows a young Muslim refugee, Majid, who seeks work and acceptance from a community that eyes him with suspicion, disdain and aggression.

Majid (the impressive Yomal Rajasinghe) is waiting for the bus where he meets the lonely and much older Anne (Helen Morse). Through a second chance encounter their friendship deepens into a romantic relationship, much to the outrage of the town’s residents.

Daniel Keene’s story is a slow-burn but utterly absorbing tale of a world of casual bigotry and racial discrimination, where at one point, a resident ranks Majid’s “darkness” on a scale of 1 to 10. The scenes involving the various townspeople (Nicholas Bell, Jonathan Taylor, Paul English, Natasha Herbert and Marco Chiappi) whilst uncomfortable to watch and hear, are a stark reminder of the attitudes that are still held by many in Australia.

Age-discrimination, poverty and gender roles are also explored in Dreamers, but with Keene’s infusion of light-hearted or comedic moments and interludes, he never makes you feel overwhelmed by the issues but allows them to enter your thoughts and rest there.

There is some inspiring work by designer Adrienne Chisholm, lighting designer Andy Turner and sound designer Sam Bolton. All these facets blend in so smoothly with the story, and serve to deepen the impact and authenticity of the production.

The talented cast of eight are highly convincing without becoming caricatures or stereotypes. Under the masterful direction of Ariette Taylor, they create some truly affecting moments, especially as we build towards the conclusion, which allows us to leave the performance buoyed up with some hope.

Dreamers is a perfect example of strong writing, acting, and directing coming together to create a highly memorable theatrical experience for its audience. Hopefully it will not be over another decade before Keene and Taylor collaborate once more.