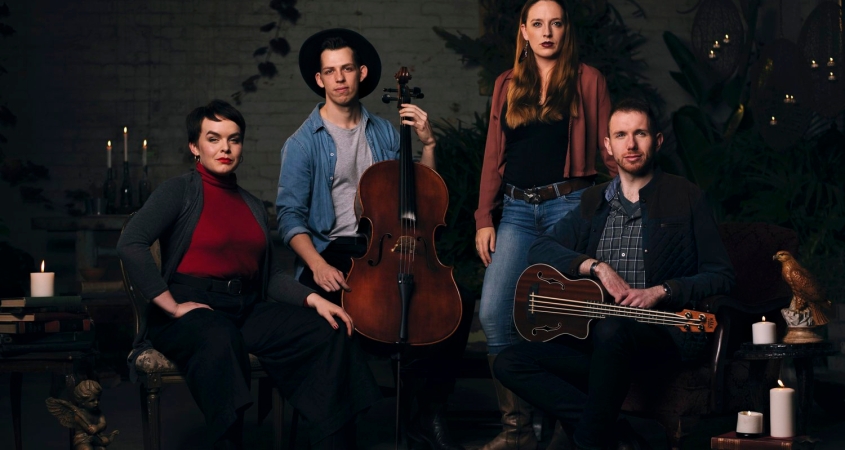 Electrifying staging of beautiful music NOT to be missed

I’ll begin with a disclaimer: I have been a huge fan of the cast recording for Ghost Quartet for many years, and was very excited to see this staging as the Australian Premiere. Dave Malloy’s score is delightful and odd, filled with moments of beauty and confusion alike. Antipodes Theatre, relatively new on the Melbournian theatre scene, have proven they are one to watch with this beautiful and haunting production.

Director and designer Brandon Pape has conjured (no pun intended) an atmosphere that is playful and eerie for Ghost Quartet to enchant its audiences with numerous entangling tales and characters. This song cycle about “love, death, and whisky” is sometimes relaxing, sometimes humorous, and sometimes genuinely chilling – but always enchanting. Storytelling is at the heart of Ghost Quartet, and Pape’s loungeroom-reminiscent setting – a place we often feel most comfortable – becomes the home of unnerving spectres as both original and familiar fables unravel. Malloy’s text must be mined for meaning, and Pape has translated layers of riddles into a moving and theatrically rich staging.

Musical Director David Butler has masterfully interpreted Dave Malloy’s malleable (or Malloyable?) score with grit and slickly rehearsed precision. You would be hard-pressed to find four voices that harmonise and blend as seamlessly as this cast who also play every note live: across piano, cello, drums, ukulele, synthesizers, organ, and other musical oddities. Not only have these four performers memorised the entire 90-minute score (a feat many pit musicians would struggle with), but perform an entire fifteen-minute section in pitch darkness. Audience members are also sometimes given the chance to contribute with percussive instrumentation – take the invitation if it’s offered.

Melissa David’s voice is a powerhouse of passion, delivering mesmerising numbers such as ‘Starchild’ and finalé ‘The Wind and Rain’ with both severity and sensitivity. Willow Sizer’s bewitchingly unique voice can seemingly transcend substance and style, becoming a terrifying instrument of its own amid the darkness. David Butler charms with improvised dialogue and delivers striking, dynamic and controlled vocals, and Patrick Schnur is cellist extraordinaire (turn a cello on its side and it can become a quasi-banjo, who knew?), often rounding out the quartet with invigorating baritone vocals.

Lighting design by Brandon Pape and Lachlan McLean is some of the most effective and evocative I have ever seen. Each song has a distinct and specific flavour, and the intimate Studio space of Gasworks transforms seamlessly into countless locations, both physical and conceptual. Sound Designer Jedd Schaeche is presented with a difficult challenge – an audience seated in the round with acoustic instruments playing in the same space live makes replicating the same balance for every seat near impossible. Unfortunately this means lyrics are often difficult to hear when the music is driving hard, a hinderance to an already oftentimes confusing and complicated book by Malloy.

To quote one audience member as they were leaving the theatre, “that last section has left me feeling sleepy, like I’m in a trance.” Ghost Quartet is a warmly hypnotic experience and a rare gem of a show, which this cast and creative team have brought to life with perfection.

Playing only until August 23rd at Gasworks Arts Park (finishing with a special ghostly 10pm show on the Friday). Tickets: https://antipodestheatre.com/ghostquartet