Grease is the word, haven’t you heard? Following a 2013 sell-out season at Her Majesty’s Theatre, the hand-jiving musical is back by popular demand, this time playing at the beautiful Regent Theatre. Bert Newton opened the show as Vince Fontaine with some audience banter which confused my theatre companion, but he was followed by a punchy overture musically directed by Peter Casey and played out by the band of men clad in silk pink shirts. From the moment the music kicks in you can’t help but get excited and dance around, possibly a little too much in your seat. 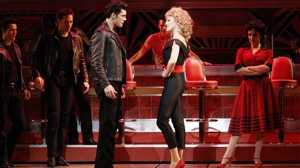 This production of Grease directed by David Gilmore was one of the most enjoyable and high-energy musicals I have seen in a long time. Rob Mills and the relatively unknown Gretel Scarlett have returned to the stage as the Rydell High heart-throbs Danny and Sandy. They were pitch perfect throughout the entire night, and slipped into the teen roles perfectly.  The show was sleek and well-polished, and the cast really nailed their parts (however if I’m going to nitpick, it probably wouldn’t hurt the ensemble to brush up on their American accents.)  I did feel the only performers who really had to work that little harder to hit those highs were the famous Aussie icons themselves, including John Paul Young, Todd McKenney and Newton himself. But don’t get me wrong: the audience was overjoyed to see these guys do their thing – they could have spoken their songs, and the opening night crowd would still have been thrilled.

The lighting was crisp, bright and replete with red LED strips and Elvis images that framed the show all evening. Fluro-pink love hearts flew in and out, adding to the 1950’s feel of the show as designed by Terry Parsons, and accompanied by the occasional pings of colour from the hanging mirror balls. The show seamlessly transitioned through all the scenes, and had a really quick pace across the evening. The famous hit songs such as “Greased Lightning” and “Summer Loving”, staged and choreographed by Arlene Phillips, were satisfyingly well-done, and I literally had to stop myself from singing along.

It was a thoroughly enjoyable night’s entertainment, and no matter how many times you may have seen the movie, I promise you won’t be disappointed seeing this musical live on stage.

Grease is playing at The Regent Theatre until January 25, 2015. Tickets start from $60.