A rich languorous voice in the darkness, calling and drawing listeners into the deep folds of blissful undisturbed slumber – as Melbourne cabaret mainstay Emma Clair Ford takes to the stage of The Butterfly Club in her latest work Laugh until I Cry, she trails her characteristic air of seductive mystery and refreshing emotional honesty, wrapped up in a honey-hued voice that thrills at the same time it soothes and relaxes. 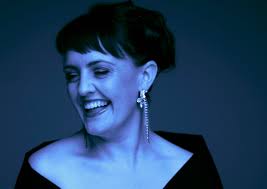 Laugh Until I Cry is a jazzy exploration of the anxiety-riddled emotional rollercoaster known as adulthood. What sets Ford apart from fellow and equally talented cabaret performers is the absolute economical tightness of her writing, in which not a word seems excessive or unnecessary but perfectly calibrated for maximum effect. Aided by Alister Smith‘s snappy direction, Ford unleashes torrents of manically-driven monologue and beautifully nonsensical dream imagery with admirable clarity and precise diction, the rich underlying musical soundscapes provided by accompanist Vicky Jacobs helping to take the audience on these imaginative journeys.

Ford herself is that contradictory combination of being radiantly charismatic at the same time she is intensely relatable and seemingly ordinary, blessed with a gorgeous voice and comic gift that can take Adele’s ‘Right as Rain’ from a jazzy jaunt into an adrenaline-crazed outburst worthy of Sondheim. Drawing on composers ranging from Gershwin and The Beatles all the way to Michael John LaChiusa, Ford takes us from one end of the day to the other, paralleling the journey from despair to acceptance and forgiveness of our own human frailties.

Laugh until I Cry, as its title implies, is an ultimately joyous celebration of the strength and fortitude needed to wade through even a single day of adult life, a great new work from an established cabaret artist which is mandatory viewing for any cabaret aficionado or those wishing to see cabaret in its purest and most creative form.
Venue: The Butterfly Club, 1 Carson Place, Melbourne.
Dates: 4th – 8th March
Times: Wednesday/Sunday 8pm, Thursday – Saturday 9pm
Tickets: Full $30, Concession $26, Members $25, Group 8+ $24
Bookings: www.thebutterflyclub.com

Out of nowhere a figure dashed onstage, the lights suddenly cutting out accompanied by a sudden strike of the drum. The lights slowly return to reveal a painted emblem emblazoned on the floor of the stage, the ensō – the Buddhist circle which expresses the moment of creativity uninhibited by the conscious mind. Into this symbolic void enters the ensemble of Pacific Overtures, clad entirely in white, taking their places around the ensō and beginning their first song: a choral ode to the cyclical serenity of feudal Japan, undisturbed by the outside world.

Pacific Overtures, one of Stephen Sondheim’s more modest and lesser-known masterpieces, is an imaginative exploration of the moment in history when Japan was first forced into contact with Western civilization. Sondheim’s score, a minimalistic collection derived from the structures and principles of Asian music, is a distant cousin to the operatic scope of his work before and after, but is nevertheless a theatrical tour de force.

The cast are so strong both dramatically and vocally that it is extremely difficult to pick an outstanding performance. As a whole they perfectly capture the stylized but intensely emotionally and characterful style of kabuki theatre, and in their individual solos they all unveil beautiful and powerful voices – in the ensemble numbers they blend together in wondrous harmony. The closest would be Adrian Li Donni as Kayama, the samurai whose meteoric rise to power and subsequent corruption strings the plot together both narratively and emotionally. Donni’s open and expressive face (along with a golden singing voice) flawlessly captures the innocence and good nature of this warrior catapulted into diplomatic office.

Director Alister Smith, along with choreographer Michael Ralph, have done an exemplary job of building the striking dramatic images that make up this epic tale. A terror-stricken mob of villagers gathering as they spot the oncoming American armada, a hilarious pageant of prostitutes preparing to welcome American sailors, a traditional Kabuki dance exploding into a demented vaudevillian cake-walk danced by a demonic Uncle Sam. In a quieter moment, the song ‘Poems’ spins together the heart-meltingly lyrical tenors of Donni and Nick Simpson-Deeks into a sequence of heart-ravishing loveliness.

This production of Pacific Overtures is a seamless meeting of dramatic intensity, musical beauty and compelling story performed by a highly skilled company of actors and handled by an endlessly inventive creative team!

Penelope by Irish playwright Enda Walsh and directed by Alister Smith shows four men seeking to receive the love of Penelope in the absence of her warrior husband, Odysseus. Through hope, fear, anger and passion, will any of them win her love?

Upon entering the theatre for this production, we watch a young man scrubbing blood from inside an empty swimming pool. Well, empty from water for it is teeming with deck chairs, books, alcohol and the disturbing red stains. In fact, the pool resembles a beach party for hoarders gone wrong. Taking center stage is a large barbeque with an ominous message for the four men of Penelope.

After this fascinating opening, the story unwinds at a perfect pace: fast enough to keep you interested but slow enough to not reveal everything at once. The mystery of the blood in the pool and the events that led up to that are ever so carefully unveiled through the taut script which works well in keeping the audience intrigued.

In contrast, costume design left little to the imagination, with all four men dressed in swimming trunks – yet each one seemed to convey a strong sense of who this character was. The brutish self-appointed leader, Quinn (Lyall Brooks) was dressed in red speedos – and you really can’t get any more alpha-male than that.

The last act however seemed to lose itself a bit. Despite the audience enjoying it, the “love in 6 acts” scene didn’t seem to have a place in the story. It relied on slapstick humour and not the sharply written dialogue and well thought-out character-driven scenes earlier, but this issue is to do with the play itself and its reworking of Homer’s classic tale rather than the direction or performances.

As this year’s Graduate Ensemble Actor for Red Stitch, Matthew Whitty as Burns certainly does show promise, however the more overtly experienced and skillful actors (Brooks, James Wardlaw and Dion Mills) in Penelope do manage to outshine him, and the impact of the final scene is therefore not as strong as it could be. It is a particularly exceptional performance by Mills as the flamboyant Dunne. His later monologue is compelling to watch as guards are let down and we see the real, vulnerable side to his character.

With strong intelligent direction by Smith, Penelope will have you pondering the moral and emotional questions it raises a good while after the show is over.

We are so far removed from the world of Nazi Germany in World War II that the true stories of the atrocities that took place are often near impossible to believe.

Himmelweg is one of the lesser known and more bizarre of these horror stories, and it is a rich source of material for a play, presenting several tricky moral dilemmas for the characters and the audience to navigate. It is also an important and fascinating exploration of this deeply disturbing period in our history. 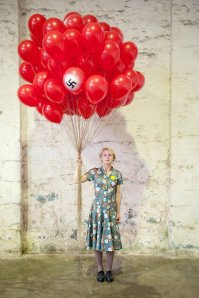 Redroom Theatre and director Alister Smith present an excellent production; the lighting and set design, as well as the sound, are spare and elegant and used effectively to evoke the era, and also to separate the play into its abstract first half and more naturalistic second half.

I think the material could have benefited from an older cast, simply because the emotional complexity may have been beyond such a young group of actors. However, they still acquit themselves capably, in particular the actors portraying the Commandant and Gottfried. These characters have to carry the entire second half in what is more or less the Commandant talking at Gottfried, and the actors performed admirably.

At a running time of two hours, there should have been plenty of material to sustain the action, however the second half becomes very repetitive with very little new information introduced.

The cast, under the superb direction of Smith, work valiantly to keep the story moving and inject as much interest as possible, but can’t quite keep the material from slowing the pace.

I think the cast and the production team deserve commendation for staging what is a difficult and challenging piece, yet a terribly important story from a time that should not be forgotten, and I encourage everyone to see it.

Himmelweg is on at Theatre Works 14 Acland Street, St Kilda from June 21 to July 1.