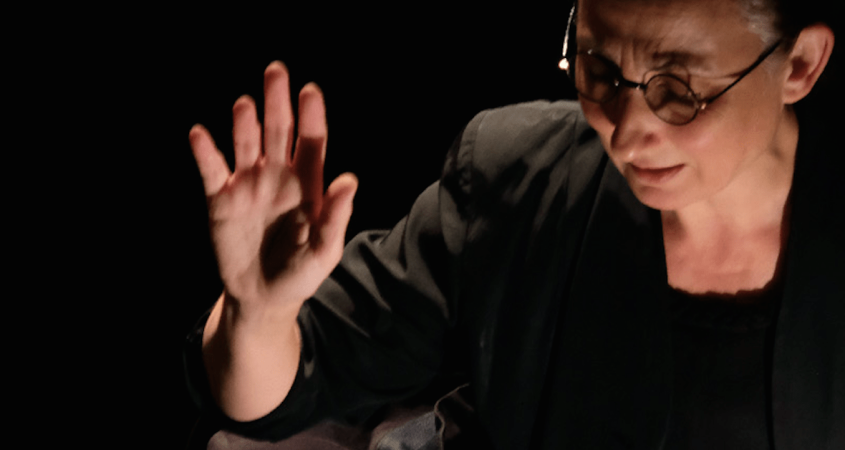 A bizarre, yet perfectly plausible set of interlocking events

Fear, frustration and overwhelming sense of foreboding, the lack of control one feels in the face of endless, incomprehensible, nonsensical bureaucracy. These emotions are deftly conveyed and uncomfortably experienced throughout this one act play. Anna is a very timely piece, although firmly set during its own time and space of Bulgaria during the Cold War.

Both written and performed by Bagryana Popov, deftly using her childhood experiences and years of research into the totalitarian regime to develop a bizarre, yet perfectly plausible set of interlocking events.

The appearance of a large sum of money is the instigating event of the play, and the contradictory stories around its origin and the attempts to dispose of it rapidly open out to display a complex web – artfully appearing on stage by the end – of interested parties with conflicting motives. Anna herself moves frequently in and out of our sympathies as she naively attempts to deal with the bureaucracy but then displays contrary behaviours at home.

Anna tells fairy stories, and perhaps the whole play is a fabrication of her mind as she slowly unravels over the course of months while events both within and out of her control turn against her. But what if the events she discusses are imagined? Is Anna paranoid or am I?

The performance of Popov is hugely affecting. She carries the entire show with aplomb, moving nimbly between portrayals of very different characters. She sings, she utilises props, she takes us with her into the chill mood behind the Iron Curtain at this time. The use of space, lighting and the raw set design suit the performance and the tightly written, almost sparse script, perfectly.

The very slight, surreal nature of the production as a whole is particularly effective against the backdrop of world politics today. One leaves with an inkling of discomfort and almost dread that lingers uncomfortably, yet I can’t help scratching at it.

At La Mama Courthouse until 22 December