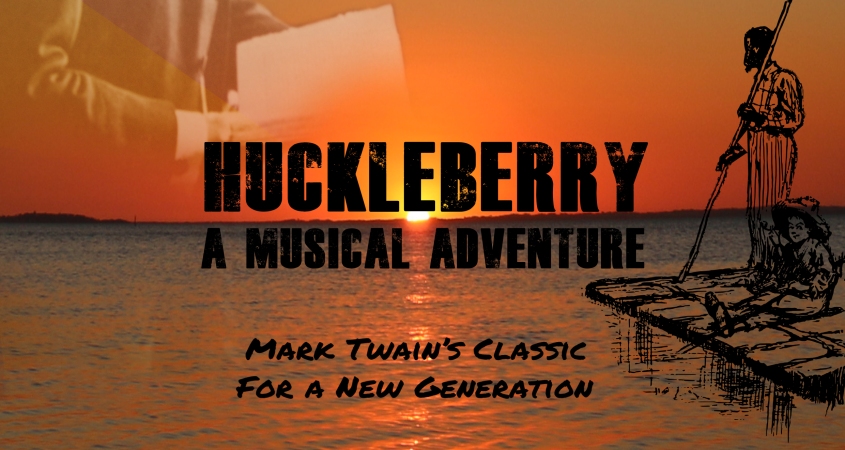 Taking on a timeless classic like The Adventures of Huckleberry Finn is a big job, though this production set its sights and heads for something unique.

Huck, a boy who escapes a life ruined by his drunken father and Jim, a runaway slave, set on down the Mississippi River looking for a new life away from the confinement of what they know. Along the way they teach each other about the ways of the world and become the best of friends. Huckleberry: A Musical Adventure takes this literary classic and adds an interesting musical element.

Chris Wallace, the creator of this original twist also plays the narrator, Mark Twain. Wallace evidently has a fascination with Twain, not to mention an uncanny likeness to the man himself. Wallace’s hillbilly musical theme carried throughout the show but did unfortunately become a little repetitive. The songs were quite short and rather sporadic at times with the difficult timing tricking the performers in certain songs. But they found their place, carried on, and did so with fervour.

Despite the passion of the performers, the writing let them down a little with transitions between songs being a little disjointed and the music not adding much to the story. It must be said that Huck’s song in which he describes his escape from the cabin was quick and catchy and used in a great comedic way.

Tess Branchflower (Huckleberry Finn) and Tess Walsh (Tom Sawyer) were fantastic casting choices. As explained, their physical size and higher vocal register lent themselves to portraying these young male characters perfectly. They were energetic, enthused and did these famous characters such due justice. The accents and characterisation of these two ladies and of Sami ‘Obama’ Weleda’abzgi (Jim) were outstanding.

The minimalistic set design by Adrienne Chisholm was really quite effective. A central raft-like structure, although a little small to accommodate the performers at times, was used with great imagination to go from scene to scene.  Smaller more detailed props helped create the runaway drama that Huckleberry Finn is built on.

The costuming, also by Chisholm, was fantastic. It was well thought through and not overly simplified like some shows set in this era can be. There were layers and a lot of effective weathering which really gave the characters something to work with and draw inspiration from.

This show definitely has a unique quality about it and has some undeniable talent involved in the cast and crew. However, some refinement in the writing style and musical elements would certainly give this production the little boost it needs.

Huckleberry: A Musical Adventure is being performed until 9 December at Chapel Off Chapel. Tickets can be purchased online and by calling the box office on 03 8920 7000.