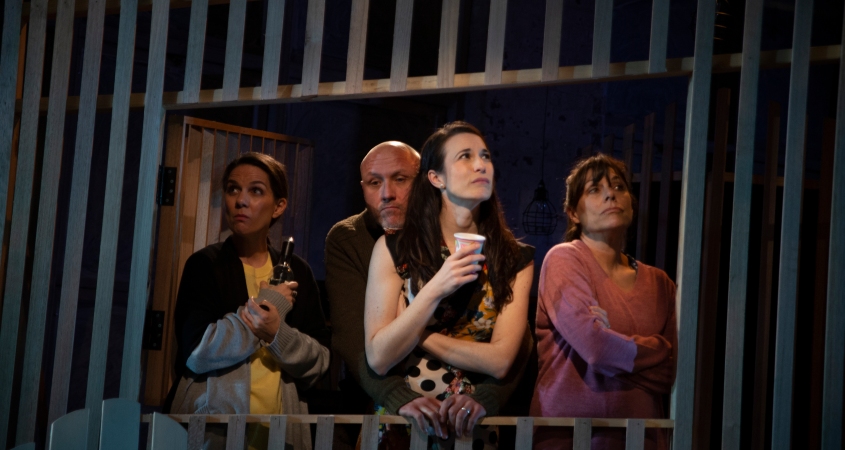 It’s not even a long weekend, but Lottie has convinced her friends to join her and her partner for a brief weekend getaway in New Haven. Played by a superbly skilled cast, Amelia Roper’s play is an offbeat comedy loaded with lively and idiosyncratic characters.

Lottie is an intriguing woman. She’s dominant, odd and oddly narcissistic, though utterly endearing all at once. Like all the personalities in Roper’s light-hearted and amusing comedy, she’s full of contradictions and good intentions.

When Lottie (Laura Maitland) and her partner Ryan (Linc Hasler) arrive at a picturesque cottage for their holiday, the first disappointment hits when they discover an enormous cliff nearby. With their expectations beginning to erode, Lottie and Ryan’s perfect vacation is further destroyed when they receive a phone call: their friend Anne and her partner can’t make it due to a sudden hospital visit.

The drama takes an unexpected turn when Clara (Michala Banas), Lottie’s long-time single and closest friend, arrives and admits she’s been having an ongoing affair with Anne. Lottie’s shock and surprise are further compounded when Anne (Ally Fowler) unpredictably shows up and confesses she’s just had an abortion despite her partner’s disapproval.

Presented by indie-theatre group, The KIN Collective, the quality of this production is of an extremely high calibre. Under the direction of Marg Downey, the entire cast make Roper’s diverse and well balanced characters shine. Hasler’s Ryan goes beyond masculine clichés with his boyish enthusiasm and frequent panic attacks. Banas’ Clara is tough and nonchalant, though the cracks begin to show when her relationship with Anne falls apart. Ally Fowler’s Anne is probably the most perplexing of all. A journalist praised as the intelligent one, Anne’s life is completely out of order between her secret affair and bouts of sloshed dancing.

Half the fun is watching the cast dart around Tim Roper’s exquisitely built set. Featuring a house made entirely of wood, Roper’s set perfectly contains the characters’ awkward attempts to connect with each other during their unfortunate weekend vacation.

The comedy remains elevated in its light-hearted humour so that the suffering of these characters never arouses much sympathy. Overarching themes of loneliness and the effect of work and income on relationships renders the story at once relatable and accessible to a broad audience. Lottie in the Late Afternoon is a brilliant comedy brimming with outlandish dialogue, played to the hilt by a superbly talented cast.

Lottie in the Late Afternoon is being performed at Fortyfivedownstairs until 30 September. Tickets can be purchased online and by calling the box office on 03 9662 9966.