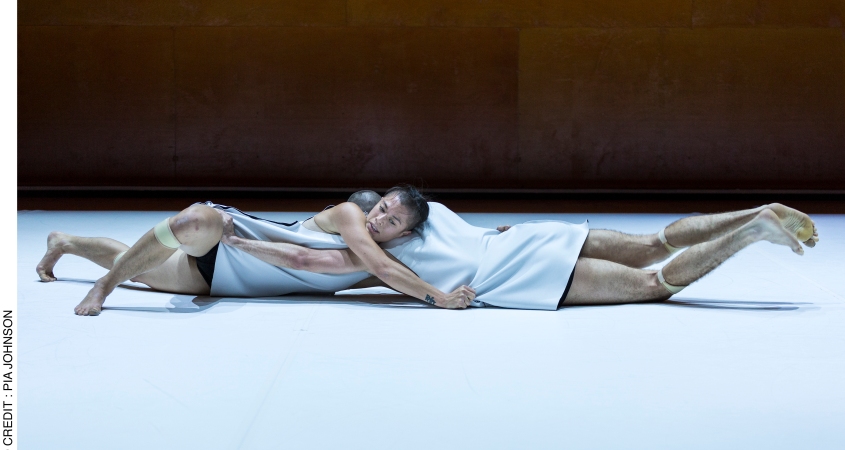 In Chunky Move’s latest production choreographer and director Anouk van Dijk’s sets focus on the essential – the relation between two. This Melbourne-based company renowned for its inventive productions full of energy and intensity surprises again with this masterful duet.

Performers Tara Jade Samaya and Richard Cilli begin walking around the room with their eyes locked on each other. Their immediate bond forms the centre-point of this piece and appears to be a living entity in itself, exposed by their constant commitment to Dijk’s striking choreography.

A vortex of emotions and inventions unfolds as each segment transitions almost secretly to the next with the aid of atmospheric lighting design by Paul Jackson and the often subtle, yet powerful music of Jethro Woodward. Moods creep up on you before even realising the previous section has ended.

Dijk’s concept springs from the duet as a utopian ideal and feuds between political leaders. Noting the birth of ballet in 17th century France in the program as well as Louis XIV’s use of ballet to promote his power, Dijk references the history of dance. Though unlike 17th century ballet, Dijk’s choreography sacrifices poise and elegance for momentum and force, creating images that arouse a strong emotional and conceptual response. Dijk’s wonders what if Louis XIV had been performing his ballets with a strong female lead?

Strong indeed is Tara Jade Samaya. In a remarkable moment where the dancers bound up and down like hungry animals, it’s Samaya who has the physical prowess: jumping higher than her male counterpart. In a moment where they move through a series of positions like a couple in bed, Samaya is neither more or less dependent on her partner Cilli: they embrace each other equally.

Exploring the complexity of equality between two bodies, Common Ground is an inventive and electric duet interpreted by two talented performers.

Common Ground runs 26 April – 5 May at Chunky Move Studios, before being performed at The Drum, Dandenong 8 May. Tickets can be purchased online.