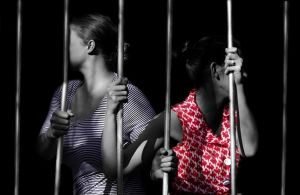 A poignant exploration of the art and power of letter writing

Director and Performer, Jennifer Monk, works towards unpacking the art and power of letter writing in To Lonely, with Love. It’s a beautiful concept – the idea that letter writing can transcend our circumstances offering connection to someone who can be so far away from our reality, or so withdrawn from their own present.

I found Monk’s thoughts on letter writing poignant, particularly as she found connection with a loved one behind prison walls through writing letters. As an avid letter writer myself, I am converted to the powers of the written word and how humbling and truly meaningful it is to write and receive it. To Lonely, with Love does a commendable job of extracting its powers, even in the short space of an hour, in such an intimate space of La Mama.

Performed by Lisa Dallinger and Monk herself, they use a stylised humour to fuss about the stage as postmasters, reading letters and voicing the trivialities and romantic longings of the letters that reveal people and worlds upon the sheets of paper. Both Dallinger and Monk are strong comedically, and this softens the intensity of the subject matter in a way that prevents it from becoming indulgent. However, at times I wanted less shifting set pieces and comedy, and a moodier set to compliment the content.

The piece shifts in and out of characters and time, where prison inmate Roger ‘Rog’, becomes an unlikely pen pal to a miserable, molested housewife, Samantha ‘Sam’, who seeks to find some form of escapism despite her stoic frailty. The roles swap, as do the costumes, and with time, as one adjusts to a life within prison, the other feels even more imprisoned in her existing life. This juxtaposition is a solid way of dealing with the power of connection that can be established between people who write letters to one another. Famously, many prison inmates have found solace, and even relationships with those who write letters to them, so strong is the bond.

Despite strong performances, To Lonely, with Love felt like a work in progress. Conceptually, it is a fantastic piece. I hope in time it will gather strength and continue to explore its execution.

To Lonely, with Love was performed at La Mama from 21 – 25 March 2018. More information is found on La Mama’s webpage.