The Other Place by Sharr White is one of the best-written pieces of theatre I’ve seen in a long time. 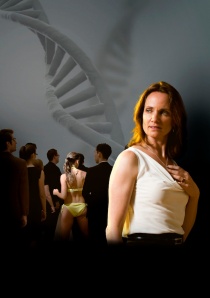 It is a fabulous double mystery: the cause of the mental disorientation of Juliana (Catherine McClements), and the discovery of what really happened at ‘the other place’.  The answer to each is dark and gut-wrenching, but the play is a clever combination of bittersweet humour and authentic characters.

Tragic stories can sometimes be too brutal to be enjoyed, but director Nadia Tass has evoked a delicacy from the text, creating a production that is simultaneously saddening and relatable.  This makes for a show in which the audience invests; we want to watch because we care.  At opening night this reviewer and many other audience members of various ages were in tears, and more than once.

Due to the disjointed timeline of the play, it’s a tough journey for the actors.  All of the cast were superb, with McClements in the lead role of Juliana and Heidi Arena as ‘A Woman’ being the standouts.  McClements beautifully navigated the alternating acidity and vulnerability of Juliana.  Arena played several roles, all with great humour, one with incredible pathos, and jumped between the scenarios ably.  However, I believe that more could have been done visually to differentiate between her roles.  I think this would have been less distracting for the audience, as playing different people only moments apart is difficult feat to achieve through performance alone.  David Roberts’ performance of Ian was touching and at times confronting, making his portrayal all the more believable given Ian’s circumstances.  David Whitely as ‘A Man’ had very few scenes, but he was very engaging in the stage time they allowed him.

The set design by Shaun Gurton was minimal and incredibly well-suited to the show.  The transitions between locations were elegant and the sense of place was fantastic.  The use of multimedia, via a giant screen at the back of the stage, was well-integrated and added to each setting in obvious or subtle ways without ever being distracting.

This production has obviously benefited from the talent and hard work of every person involved.  I found the story almost unbearably tragic, but the telling of it is too well-executed to miss.